After 4 years... what‘s my favourite breakfast in MX?

Firstoff... Breakfast here is usually wayyyy richer than in Spain, France or Germany, for example... Although it surely compares with a full oirish breakfast, hahaha...

There are big regional differences, and also depends of course on your wallet. In the street you get something for a cheap as 50 cents. While even in the cheapest restaurant (a Fonda) you will pay at least 3 USD.

You can east pretty any of these during any hour of the day. Tamal or Tlacoyo at 5 PM? No problem. But I would still call them breakfast food, hehe...

So, to the list (I am not going by order, I love them all pretty equally).

Tamales. from 75 cents to 2 USD. My favourites are from Emy, a bit posh, yeah. But the ones with Rajas and the ones with Mole... get a black coffee, and instant heaven. Well, until the GF tells you to clean the house (on weekend), or you have the first meeting (weekdays...) :P

Gorditas de chicharron, preferably made of the blue sweetcorn (mais azul). I prefer Comal to fried, big time. Between 50 Cents and a Dollar and a half. I usually have them with Nopales (the cactus) or quelites. Plus a bit cheese, and red (spicy) sauce. Again, have them with black coffee, and instant heaven (all other comments from above apply, too :P )

Tlacoyos. preferably made of the blue sweetcorn (mais azul). They usually come with Frijoles (beans), requeson (curd) or haba (green beans). The stand just outside of the Mercado Medellin (with Monterrey) is great! Costs? Between 50 Cents to 1 USD. Similar to the Gorditas, you have them with Nopal, cheese and sauce (red or green, hehe...). What to drink? well, black coffee, what else... (insert sign here for instant heaven).

Caldo de res - just a simple stew, made with beef. Gosh... Here, if you want, you can substitute the coffee for a coke.

Huarache, with e.g. cecina. Cost between 3 and 5 USD. My favourites in the Mercado de Jamaica. Where? Close where the flowers are, hehe... Best with a black coffee (imho). Instant...

What many Mexicans love, would be Pozole. I myself eat it, when hungry, but am not crazy for it. sorry :P

And, while you eat these usually in the street... bring some Kleenex. You never know, what sideeffects coffee and spicy sauce have. and paper is sometimes scarce in these simple toilets :D

So, December 31st 2016 I took a plane to start living in Mexico City (where I still am, hehe). On the flight over I got a free upgrade to Business (cool, hehe...), but customs took the 3 pounds of spanish ham I brought (fair trade me thinks).

How did I end up here? I was a happy camper in Torrejon/Madrid, wasn´t I...

I had that idea already a few years ago, to live half a year or so in Peru...  But yes... So I finished Hesses Steppenwolf last year in March. And Hesse always makes me think. Having a look in OCC mundial (mexican jobsite), I found a a few interesting jobs. But for some they wanted someone maximum 45 years of age. I was just that, for 2 MORE MONTHS!!! Then I´d be 46!!! :-(

So really, that gave me a kick. Started off with getting a new passport (mine was only valid for 1 more year). And then, off jobhunting. Not only in MX, but also Argentina, Peru, Uruguay, Chile, Costa Rica, Panama... I think I still have accounts in more than 20 websites, hehe...

Anyway, 1000 applications more or less, I found something. Average every 80 applications I had an interview (Panama, Argentina, MX, Uruguay, Costa Rica). None in Chile, Peru, Ecuador. Well, some I managed well, some I just failed. But usually they said "bugger, that you're still in Spain, we really need someone that can start in a month top."

The CompuCom Interviews, well... first the english test. Not that tricky. Then first real interview. 3 people, the HR girl from MX dialled me in. Connection was bad, I couldn´t hear them, and vice versa. After that, I thought "dude, thats it, that was crap".

But no... second interview. Again, the HR girl dialled me in -- very bad connection. So I asked for the dial in details, left the bridge, and dialled in myself. MUUUCH better. the interview was scheduled for 30 mins, but we talked for an hour. :-)

Since I had like 5 going away parties (with different groups, but often the same place), one guy in that bar (Pacifico, in Torrejon) said "dude, now get the fuck over to Mexico already, how many more leaving parties do you want to have???" And I was simply practising for the "maraton Guadalupe Reyes" :-P

So, the difference really in regards to Germany/Ireland/Spain?, what did I find here?

- yes, people run when crossing the street, sometimes it is dangerous.
- power cables hang very low at times, you really have to watch where you're going
- almost no litter boxes. Just in the city centre. so, litter the street, or take home.
- Girls do their makeup everywhere. waiting for the bus, in the office (one even irons her hair in the office!!!)
- boardwalks are very uneven, irregular. curbs like a foot high...
- Queues in unexpected places...ATM at payday (although nothing like the taxi queues back in the nineties in Dublin...)
- Pay is very often twice a months, bi weekly...
- The metrobus has 3 doors. one is for women only (don't enter there if yer male, they kinda look at ye...)
- coca cola light or zero? not in all places... very often just coke normal
- they do actually have rental bikes here, ecobici! I was surprised, and works well!
- in the office they sometimes do drug tests. they give you 2 days notice, and off you go to the doctor

So far, I am loving it. Great people, great food, good craic...I live in a quite safe hood in CDMX, sharing with a cool girl, Lau. And I hope some stage I can get me own feckin flat ;-) 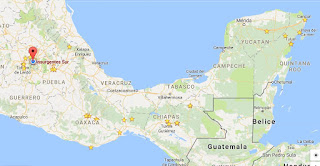 Summary of my years in Spain 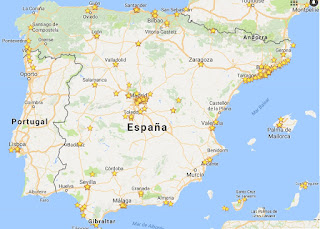 6 years of my life in Spain. 2 years in Barcelona, Poble Sec, and 4 in the outskirts of Madrid, Torrejon de Ardoz.

Got to know Spain quite well... and its not a country, but a collection of regions... people are so different, depending on where they come from... more or less nationalist, more or less progressive, more laid back or more hard working... all sorts....

What places I didn't get to visit? Hm, never made it to Ibiza, Menorca, Los picos de Europa, Murcia, Caceres (where la Beatricilla is from)...

Gosh, gonna miss my bicyle rides between Torrejon and Alcala... 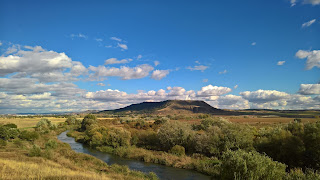 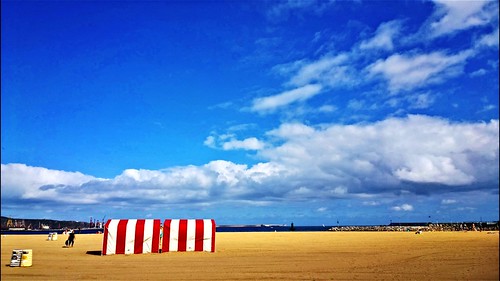 
Well well, what did I do since my visit to Cuenca? (for sure, the tapas in the bodeguilla de basilio arte still the best, hehe)... Alicante Spring festival! How friendly and helpful the people down there... showing me the way, and one guy even escorted me to the museum of modern art... and then, Saturday, at around 13:00, just behind the mercado, all these people having a beer, jamon, olives... If you dont find someone to talk to there, you are weird :-P

The concert then, my favorites, "grises. Columpio Asesino, it seemed they had a fight just before the concert... seemed bored... what a pity...Toro, still my favourite song!
My Birthday (am proud 44 now!), in Germany, in my hometown, with my brother, whos birthday is the next day after mine. We celebrated in the garden of friend... minus 2 centigrade at midnight, windshields frozen... but nothing a bit of rum cant fix ;)

Tarifa! The pic from above... the historic centre beautiful... and, a paradise for wind surfers... gorgeous pancakes with crabs... The journey from Madrid, well,... worth it! 2 weeks later then off to Aranjuez, with the strawberry train, where the give you special strawberries (extra large) for free... well, included in the journey, hehe). The palace... seems so real, that you can imagine the royal family living there a few centirues ago...was the same night, when Atletico lost to Real Madrid... what a pity... well, at least they won the League :)

Avila! The famous Stone Walls.. and the steak, hehe.. Match Uruguay vs. England...The hotel we stayed in Hotel Palacio de los Velada, very good value for the menu (in off peak times)...

Valladolid.. this red brick architecture,, which always reminds me of Hamburg...Town Square, Friday Eve...one one side about 100 guys dancing salsa... and on the other side a demonstration of gays, with a Rumba band... kind of weird, this mix of salsa and the other guys shouting their slogans...

And, next weekend off to Merida... to the roman Amphitheatre, will be watching Salome...a bit of tapas, I imagine.. because, in Merida (as in all cities in Spain): You eat very well there :-D 2 hours on the bus, 26 Euros return, 27 euros the room (Airbnb.com), 3 euros the admission for the museum of abstract art, 2 Euros for the foundation Antonio Perez, 4 Euros for stamps and picture postcards, and a few more for booze and food ;)

Loved it! Rain, cold, snow, but it didn't matter. What a precious place... it leaves you breathless (since you have to climb all the way up, and thats not just a few steps, hehe).

I tried the local food, Resoli, Ajo arriero and morteruelo.

Favourite places? The museums I spoke of already, la posada San Jose (kind of a hotel, with very nice views), the restaurant Los Arcos (good service), aaaand, the tapas in the Bodeguilla de basileo (thanks Eva for the tip!). The best ones I had in my 3 years here in Sapin!

Well, and if you want, you can have a good night out too... I think I need to get back there ;)